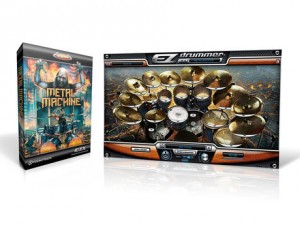 Being a drum software advocate for many years now, I always get very excited when a new product hits the market! Toontrack’s EZX Metal Machine was no exception. Engineered by the master Andy Sneap, and with drumming legend John Tempesta behind the kit, it was surely a match made for metal.

After installing the library, I eagerly loaded the SD2.0 interface to have a play about. The first thing I noticed instantly was how great it sounded right out the box. Even on the default construct screen, with the default drums in front of you, all channels free from processing, and all default fader levels, it sounds incredible.

Something to note; some of you out there may see this default state as a negative. I know when SD2.0 was released people were somewhat uncomfortable with its level of pre-processing in relation to the first Superior Drummer and EZ Drummer, and their respective rawness. There is something a little more pleasing to a mix engineer when the files at hand, no matter what instrument, are as raw as possible.

With that said, I don’t feel that this level of processing is going to work against a mix in any sense, as the sounds on offer are still extremely pliable. I also believe that the fairly processed sound is due in part to masterful engineering, as opposed to applied processing, post-recording. 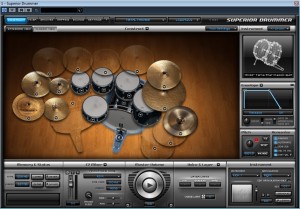 As with all Toontrack drum libraries, there is an array of beautifully engineered drums on offer. With previous releases though I’ve sometimes struggled to initially find a drum that fits my mix so readily, without some tweaking and/or pitch-shifting, as is to be expected. With Metal Machine I’ve almost got the opposite problem – every drum sounds so good that I’m spoilt for choice.

There’s a really great range of snares on offer, from John Tempesta’s personal collection. I’m very picky about snares personally, but there’s something for everyone here, from the snap and crack-laden thrashy snares, to the puffy big snares that seem to be in vogue at the minute with modern metalcore. Most of all they sound wonderfully natural whilst still retaining a professionally achieved level of consistency.

With only 3 kicks on offer (although double kicks enables you to mix and match, of course, like in previous versions) you are somewhat limited to your base sound. Having said that, these are definitely the most instantly usable kicks in any Toontrack library by far. I’ve often found kicks to be their weakness in previous releases, offering great blending options with external sampling, but not able to stand on their own in a dense metal mix. These certainly can do that, and bring forward a much more modern metal sound, with great punch and weight, as well as a great click-range that is very adaptable.

My favourite feature of all these drums though has to be the toms. With nothing more than a little scoop to the midrange and a nod to the highs, they sit right where I want them in any mix, metal or otherwise. They have a very solid midrange, and tend not to suffer from an over abundance of boom. Easily my favourite Toontrack toms thus far! However, there is a little bit of a velocity drop when going to the floor tom it seems, and even given the fact that they are a bigger and less present drum, they tend to not be as up front as they could be, compared to the rack toms.

This happens to be the first Toontrack library I’ve used with a separate ride mic, and I couldn’t be more pleased! I’ve often spoken to other users of the software and many times they have shared my frustration at not being able to bring the ride out in the mix without having to use general volume increasing in the construct. This brings around many problems, since the ride may sit nicely with one articulation but be too loud with another. Finally, with a separate ride mic, you now have total control over it and its articulation in the mix. Not to mention these are damn fine rides to begin with. Very chimey and dynamic, and are definitely above and beyond previous ride sampling in terms of realism.

The overheads in general are very nicely managed, well balanced, and varied. I found that blending them with a heavily compressed instance of the ambient room mic gives the entire kit (but especially the overheads) a feeling of great size and motion, whilst still retaining clarity and separation.

This is my only real qualm about this library.

MIDI velocities and their impact on the drum dynamics tend to differ from library to library, and in the case of Metal Machine, I find them to be quite peculiar, particularly on snares.

I tend to have my input velocity set to 120 as a default, which leaves 7 levels to reach the max (127) to play with harder hits on slower parts, and enough room for softer ones on fast parts and drum fills.

This is all fine for the most part, the drums sound great at 120, but the snares don’t have much variation in their harder/hardest hits until you actually reach 127. And then they make a different sound entirely. They increase quite naturally right up to 126, but at 127 they just sound like a different snare, with an almighty crack and ping that pokes right out. I feel that there needs to be more of a gradient between 120 and 127, or perhaps more variation of hits between 125 and 127. 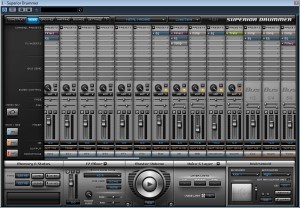 So here is my mix test with the drums. There is very little to comment really, other than the time it took to mix it – which was practically zero. Once levels were set it was just so easy to shave off a freqeuncy here and there, boost another here and there… Without making it sound like the work is done for you, it really couldn’t be more mix-ready.

This was mixed completely “in the box” – i.e. none of the channels within the Toontrack interface were brought out into my DAW. It was mixed purely using the Toontrack SD2.0 mixer and plugins.

At this price point you don’t have an excuse to not grab a copy. So do it. Now.

To download the preset of the drums heard in the mix test, please click here. Please make sure to place the preset in the following place: my documents/toontrack/superior2/presetsEZX/EZXMetalMachine/Combined

To load the preset go to Load/Save > Combined Preset > User Presets > Numbskull, as seen in this image 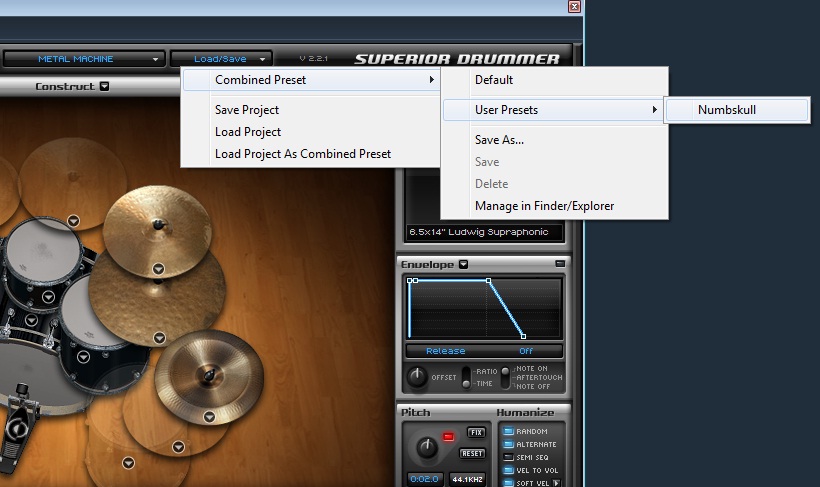