Hello and welcome to Part 2 of the Tone-Clone series! 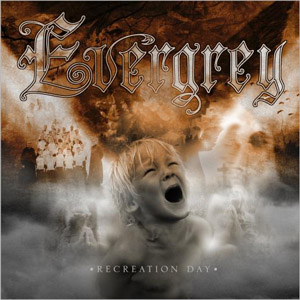 Evergrey are a band that always stands out to me where production is concerned, as they never seem to adhere to any current convention, whilst making a truly unique but cohesive output that fits their music perfectly.

Usually known for guitar tones that steer towards the unusual, I initially had a mild panic attack when Evergrey kept appearing for the next suggestion for a Tone-Clone segment. But the more I pondered it and delved through their back catalogue, the more I remembered just how much I love this band, the riffs, the tones, and how much it would be equally as much fun as it would be challenging.

The problem is, Evergrey are one of those bands that aren’t particularly ‘public’ about their methods or, more importantly, their equipment! Even in this day and age of the internet and nothing really being as ‘underground’ as it used to be, it’s still very difficult to find info on what was used for certain albums. And as we all know, what a band uses on the road doesn’t necessarily have a single thing in common to what was used on record.

So, trusty ol’ ears to the rescue.

More often than not, this is the best course of action for mimicking a tone/mix anyway. Not knowing exactly what was used leaves out all preconceptions and lets you hear things a bit more subjectively and contextually.

The tone
There’s undeniably something very Mesa/Boogie-ish about their earlier tones. A brief Googling reveals much speculation as to whether the Recreation Day tone in particular was either Triaxis (which they have been known to use live during this period and on earlier albums) or Peavey 5150. My gut (and ears, of course) is telling me it’s not a 5150. I have heard a few 5150 tones that completely threw me, and made me scratch my head a bit, but even so I’d be incredibly surprised if this was indeed a Peavey.

Amp
Knowing what sort of tones can be achieved with LePou’s LeCto, it was a bit of a no-brainer to reach for that. It’s, in a way, in between the two possible bits of gear used anyway. It can do both Triaxis and 5150-ish, and it really didn’t take long to know that this was the sim to use.

Almost immediately after pulling up any old impulse I could hear that top end ‘grain’ that the album has. It’s what I would call ‘woolly’, and that’s a very Mesa/Boogie trait, particularly with the Triaxis preamp and of course the Rectifier series.

The Evergrey tone in question has a lot of tight, percussive attack (during that down-picked ‘chugging’ section it’s so damn tasty, and almost has a… dare I say it… ‘djenty’ quality), so I can only assume they are using some sort of Tubescreamer variant in front. As always, I went for the trusty TSE 808 which can be downloaded here – http://www.tseaudio.com/software.html

Cab Impulses
This was a tough one. Anybody who does in fact know anything about Evergrey and their choice of guitar rigs in the studio knows that they are incredibly secretive about the cab/speaker choice! You can’t find that information anywhere, and you never actually see any footage/pictures of what is used. Again, this only induces speculation, but going by my ears I’m putting my money on a V30’s sound, possibly Mesa but definitely not the Standard OS deep/grainy/open sound we’re accustomed to on most modern metal productions. It’s more traditional, smaller, tighter, boxier. I would assume either a 1960AV, Mesa Traditional, or a custom made 4×12 of some description.

After much deliberation and experimentation I settled on two impulses found in a pack which can be downloaded from here: http://www.lechatelet.de/IR/files/ (Rectifier_Setup_da_impact.zip)

I used both impulses in that pack in equal blend. They seemed to capture the general EQ of the tone, and helped bring home some of that grit in the top end.

There was something missing, however, a little depth and air. I added a third impulse from the trusty GuitarHack pack (if you are into home recording and using amp sims/impulses and don’t have this impulse pack yet, you need to go outside and have a word with yourself – http://relivethefuture.com/music/patches/GuitarHacksImpulses.rar). After trying a few I settled on a 45 angle (off axis) impulse that did just the trick. It’s not absolutely essential but I felt that it added a touch of depth that was missing.

IMPORTANT: You will, however, have to play with the delay settings as there is a phase issue between this GuitarHack impulse and the other two aforementioned impulses. On the LeCab2 plug-in I had the delay for this impulse set at 0.3ms, as you can see from the image below. 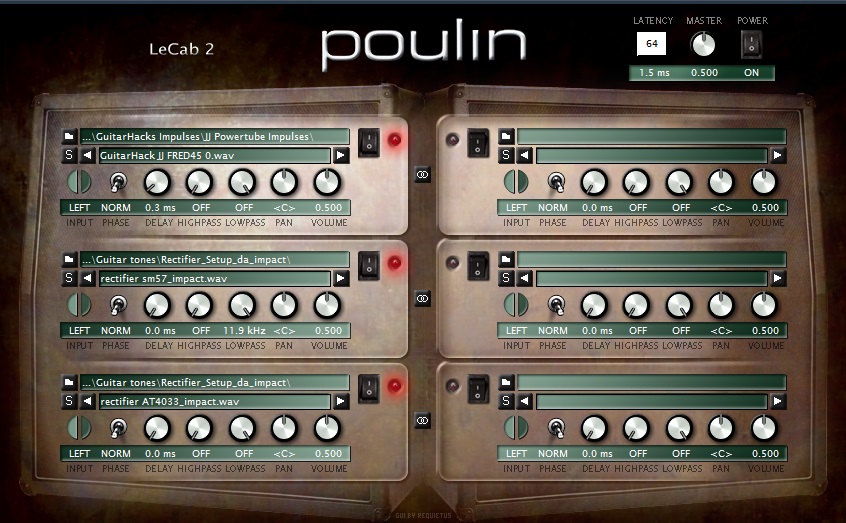 Processing
Barely any. I didn’t even use any multiband compression, which is a rarity for me. This was a simple hi-pass/lo-pass job, at 100hz and 8k respectively. I found that, with the impulses chosen to get the correct EQ curve, any compression and other processes would be detrimental to the bulbous and airy tone of the original.


(Credit to Lee Cassidy for Synths)

ALL PLUG-INS AND SETTINGS 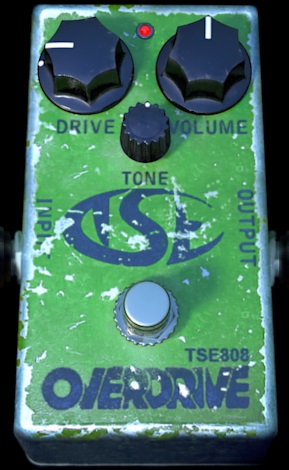